We were privileged to have John Regnault G4SWX return to the club, only this time to tackle all things coax, attenuators and stub filters. A lot of the people attending the talk agreed that they had taken away a lot more information on just how to make off cuts to full lengths of coax do more than just act as normal feeder. I had seen many images and other peoples stubs and filters with coax but admit never had built one myself…..well at least not with coax. 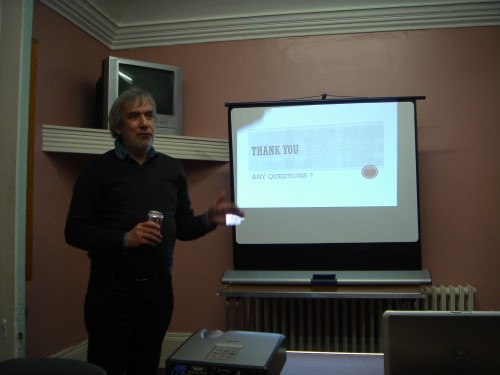 John with his years of expert knowledge put into text what I had yet to grasp after reading for many months on the web and still left me a little bemused…and confused. Its one thing seeing it on the web, I guess and another actually having the physical evidence in your hands. Looking over Johns props made me just realise that I really had little to fear and there is quite a bit of maths involved in making a successful filter or tuned coax stub but there’s also a lot of physical work in the tuning. Leaving out most of the maths for this talk it was very easy to understand the fundamental without ever losing sight of the overall aim.

All in all, another fantastic talk with no loose ties. Its always good to have John at the club and I would urge anyone who has ever wondered how they can snuffle stray signals or RF; look into Stubs and filters using coax a little more. Zapping bad RF is something we all must keep an eye on. Having someone who can show you how best to go about it….now that’s worth its weight in…Gold. 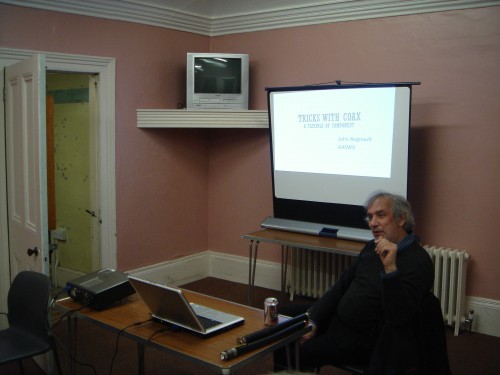 Sorry about the late posting, however I had intended to make this post earlier but we failed to get any publicity snaps of the constructors cup so I really didn’t wish to appear dull. The results are as follows.

And the runner up award went to G8PMU Steve Lambert with his power supply for a Clansman radio, that he was kind enough to bring up and demonstrate. Again outstanding quality and had hand wound transformers included.

I had intentions of bringing my 30v 3a PSU, mostly kit built “however” some thought went into the measuring and metering and the fail safe electronic fuse which I am currently working on. As I was not entirely satisfied it was complete, it stayed at home.

Another very interesting radio rally as far as meetings go, well for me it was. Quite a few bargains to be had and the usual fine display from Kenwood (who also gave away many freebies), Waters and Stanton, Moonraker to name a few of the major stands.

Then you have your sole trader who brings along those elusive parts you have been looking for…..well for years. I personally picked up a nice haul of 240v 12-0-12 transformers for those winter’y afternoon builds when its blowing a force 9 gale…”much like today as this blogger types” and its raining with the only thing to do stay inside. Quite a bit more emphasis seems to be on gadgets these days rather than your “build a radio” as it may have been in times gone by. I personally love to get parts, wait for a few weeks to get all the bits together and go for it.

Referring to a recent Dick Smith interview I found on YouTube, Dick talks about how he started out collecting components before branching out and actually selling them. Australia’s home grown entrepreneur also talks much about this days as a radio amateur and how it saved his life when he flew around the globe in a helicopter.  Dick makes reference to using 20m while flying (not sure if we have /AM or Aeronautical Mobile –  granted in the UK yet but I was sure it would be granted for HAB or High Altitude Balloons….however from my understanding…not yet).

So good to see some of the guys from LEFARS there, and a few faces I recognised from the Essex Repeater Group too. Not a lot of time to chat though……which is unusual for this particular ham, who can gas away until people start to cry.

So all in all, many good bargains to be had, and certainly something for everyone and not a million miles away so well attended as far as I can tell from radio clubs in the South East of England.

I found this rally quite moving too, as the time reached 11am GMT the whole place fell silent and there really was not a sound for over 5 minutes, in impeccable respect for our war dead. I was personally very moved by this. I think solidarity and an overall feeling that people really care….. 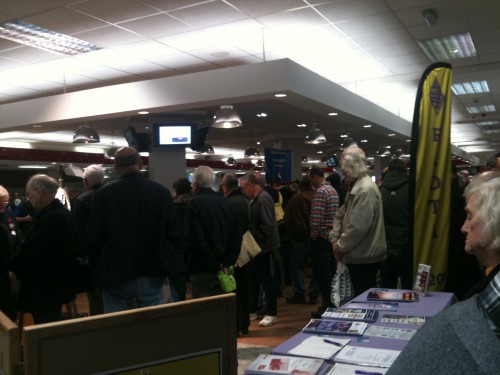 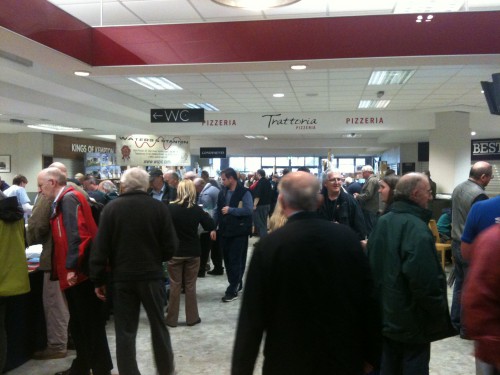 A link to the Dick Smith video:

Steve G8PMU gives us a talk on the fundamentals of an oscilloscope. Covered quite a bit of ground and refreshed much of the information I personally had lost over the years. Great demonstrations accompanied by a good talk and hopefully like the Oliver Tillett G3TPJ A.B.C in electronics series, Steve will return to give another talk on scopes that go much deeper. From mixing signals to flat-topping, from amplitude modulation to video signals and how to detect them, tonight’s talk covered them all. 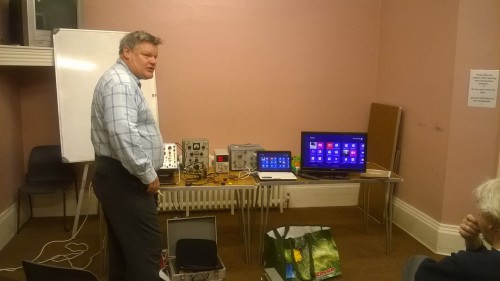 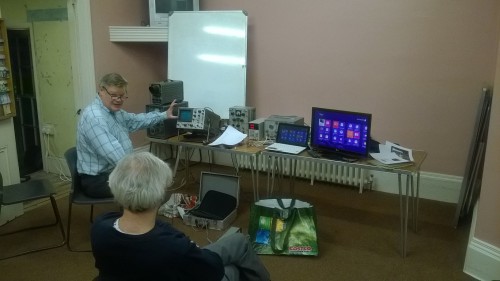 We were delighted when Shahid Banglawala agreed to break his busy schedule and pop in and give a talk on Octo and Quad copters, 8K and 3D video and his rise from humble student to world renowned Octocopter pilot. Now his name appears in the credits of some of the most spectacular aerial photography. For those who wanted to get their fist insight into Aerial Cinematography or seasoned pro photographers wishing to pick up tips this was one not to be missed. From an amateurs point it also opened doors to flying a wire antenna or gentle placing wires in tree’s before ejecting the payload.
Pictured here with a ground mounted Gimble. Brilliant talk, encapsulating the skill required to fly in the darkest caves of Borneo and 20 feet above the ground in Austria. Back from his recent work filming the aerial photography for Sir David Attenborough’s Conquest of the Skies. 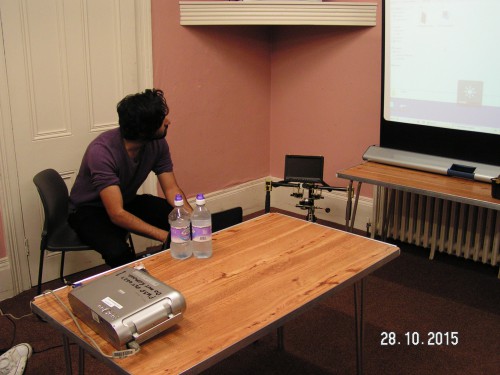 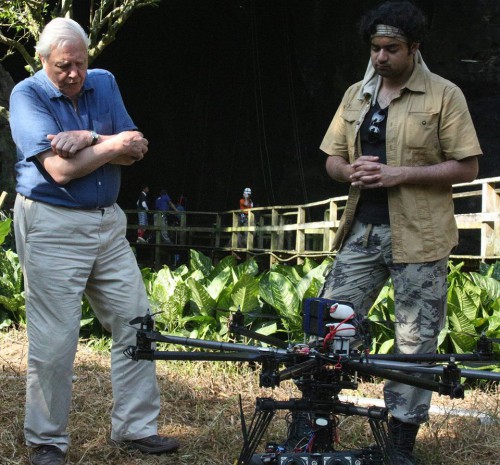 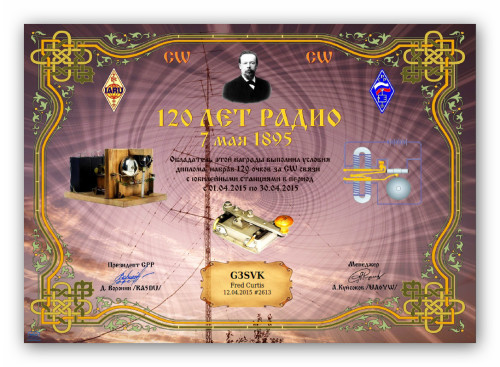