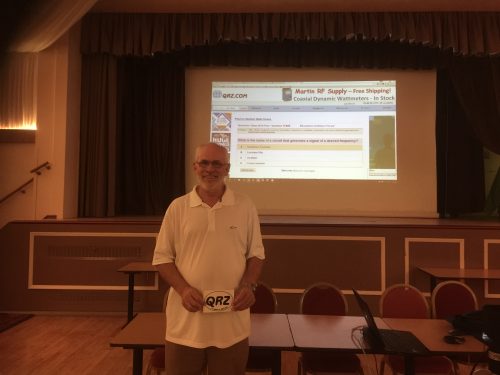 We had the greatest honour in recent years to be blessed with Fred Lloyd’s AA7BQ (President and Founder of QRZ.com) visit to the UK. Further more, we had Fred come visit us in person and give us an inspiring talk on the early days of QRZ right through to modern and beyond…. life as a ham does not get much better than that.

In the early 1990’s “1993 to be exact”, Fred Lloyd had an idea to get all the names and information of every ham in the USA and bundle them up on a QIC cartridge for distribution amongst hams. From a 9 track to QIC and later to CD rom the database just started to grow and grow. As time continued so did the database and it continued to grow more and more to what we are blessed with today. A friendly database that’s full to the brim with information on your fellow ham. Fred talks much about the progression from home servers, to T1 broadband and onwards to greater things … fast forward to 2016 and now the database is safe as bricks and mortar in  the cloud for 24/7 uptime. Now that’s progression.

QRZ.com in history was established way before Yahoo, Amazon, eBay, Twitter and even Google.!! So how has QRZ.com come so far. In my own words, “A thinker is someone who understands the peoples needs and adapts to that without straying from the original concept.” Well in truth QRZ was established way before 1993….. as a BBS (for those who are old enough to remember Bulletin Boards and News groups). From that and FTP server and bridging 30+ years to today in the Amazon cloud. Fred talks about his early years as a programmer and he really has kept up to date with progression. QRZ today has a dedicated XML server and database server ensuring that the site is always accessible.

Now in present day 2016 QRZ incorporates awards, logging, XML lookups (for integration into logging software), custom page design to name the most popular, but more than ever the database has grown and if you want your amateur radio online presence to be documented then you have a QRZ page to do that…..and its still free (quite a feat as the 80gb [citation needed] a month bandwidth QRZ consumes is not cheap). QRZ has survived through very clever, non intrusive advertising which keeps the site alive. QRZ has also expanded to included staff to answer your questions and queries within 24 hours, a dedicated web designer and QRZ page designer.

In another propellerhead flash on Genius, Fred talks about his decision to publish questions from past Amateur radio exams. With a broad grin Fred declares “I helped thousands of people get through their exam”.

In summary QRZ.com has had an impact on the world of amateur radio. Looking inside someone’s shack from the comfort of yours is a stroke of genius and I would thoroughly recommend taking out a QRZ subscription of some sort.  An example is HRD or Ham Radio Deluxe. Have you ever been inside your favourite logging program (other than QRZ of course) and had to fill in tedious data on the fly……yes I hear you cry. Then your destined for the XML database. it quite simply ties the mass of data on QRZ to your logging program and before you have even finished typing the callsign, the users data is filled in automatically.  Or get the ad free version if you do a lot of portable operating, on a slow broadband connection or use a cellular phone to get your internet. The ad free version is considerably quicker loading than the free page and preserves you monthly limits too.

Don’t take my word for it, check out QRZ subscriptions here and choose the right one for you and don’t hang about as the turbulent £££ pound may mean your paying more in the future.

I would like to thank Fred and Robin (Fred’s amazing wife) for one of the most level headed and clear thinking talks the Havering and District Amateur Radio Clubs has ever had. I think the worlds owes Fred a debt of thanks for keeping the No#1 amateur radio website alive.